First view of the morning: Morro Rock. It was quite a picturesque way to start the day. 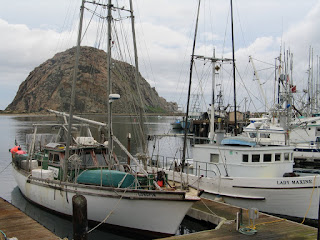 Another good start to the day: strawberries! You know you’re in California when you can buy fresh strawberries in the middle of December. Whenever I see signs for little farm stands with fresh fruit, you can be sure I turn off the road, and today was no different. The chubby, cheery farmer from what I think was called Hidalgo farms–right on the side of Los Osos Avenue on the way in to San Luis Obispo–seemed highly amused at the rapture his delicious strawberries inspired in me.

But seriously, you can’t argue with fresh strawberries.

Other than rocks and berries, my day was filled with San Luis Obispo. It’s hard to say for sure whether a city is cool or not from only a few hours there, but San Luis Obispo seemed pretty cool. There were bike lanes, for one–not as nice as Santa Cruz or Monterey, and a little narrow, but at least they showed some effort to include non-motorized travelers as viable users of the road. There were also bike shops, which was a lovely discovery since my tires had been feeling a little low. (If you’re never done this, pumping up your bike tires to full capacity after they’ve been low for a while will make it feel like you have a whole new bike.) Also exciting discoveries were a totally vegan restaurant where I had lunch (so yummy), a happy little creek by Mission San Luis Obispo where I could sit in peace and write in my journal, and a great public library where I could check my email and look up some directions to a few places I wanted to go.

I also found a good store to restock my always-dwindling food supply: trail mix, a few red peppers, some apples, tangerines, a protein bar or two, two delicious vegan cookies–I grabbed all the necessities and added them to my stash.

South of San Luis Obispo, I biked through Pismo Beach, a place I often hear the name of but would have had no idea where to place on a map. I think I’ve always heard of it as a nice place, but it kind of creeped me out, honestly. Perhaps I was there at a particularly dead time, but there was no one out, just a bunch of very pristine-looking houses and palm trees. It reminded me of a movie set, nothing moving beneath the facade. The best part of it was on the way out, when I saw this little reindeer reminder that I was biking in the middle of winter: 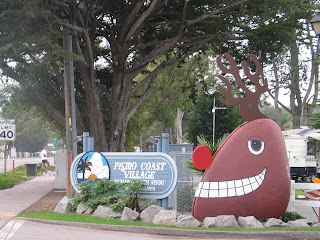 Until today, with this dude and a Santa whose lap you could sit on right by Mission San Luis Obispo, I’d totally forgotten that it was almost Christmas.

Perhaps the most exciting part of the day, however, came this evening, when I found the Oceano campground. They’d discontinued the hiker/biker sites there, which made me quite sad, but a friendly park ranger ended up letting me stay for free instead–an even better deal than the hiker/biker prices, which I didn’t think was possible!:) The campground is right by the Pismo Dunes, which made for some fun landscape, and some beautiful sunset beach-walking. And what was that frolicking out in the waves as the sun went down? I can’t be 100% sure about this, but I’m fairly certain it was…. whales!! At first I thought I was seeing things, or that maybe I was being tricked by a diving pelican or something, but no, that certainly did look like a tail… and some shooting water… and another tail… I’m pretty sure I indeed saw whales.

When I went to bed, the temperature seemed to be dropping rapidly. The storm everyone was talking about was supposed to hit the next night, and I had a big day of biking in front of me if I was going to make it to the house that Skye, one of the dudes from Big Sur, had offered to let me stay in. I went to sleep prepared to wake up, pack up, and set out in the morning dark…

Beaches, palms…was that a WHALE?!