So, I haven’t talked about this at all, but much of the trip prior to today was, in some sense, leading up to the stretch of road I was about to embark on. It’s the stretch between Monterey and Ragged Point, the stretch that contains Big Sur and all its redwoods, the stretch that people are all thinking of when they imagine the soaring cliffs and winding roads of Highway 1. In short, it’s the stretch that makes people think I was crazy for wanting to bike here.

All I knew about it was what it said in Bicycling the Pacific Coast, the fantastic book I used for directions and guidance:

South of Monterey, Highway 1 heads over a wild, undeveloped section of the coast. Rugged cliffs descend at near-vertical angles from the mountains to the pounding surf, leaving little room for man or his roads… Riding the steeply rolling terrain is strenuous, both physically and mentally. The road is narrow, with little to no shoulder when you need it. Traffic is moderate to heavy, consisting mainly of tourists and tour buses…

And, of course, there’s what I heard from those near and dear to me, as well as random people who heard tell of my plans: “It’s so dangerous!” “There’s no shoulder!” “There are cliffs!” “There’s so much traffic!” “You’re going to get run off the road by some tourists in an RV gaping at the view!” “I can’t believe you’re doing this!” “You’re crazy!”

Needless to say, I woke up quite nervous.

Even though I was antsy to get on the road early, I took a short detour into the city of Carmel. John, a fellow I’d met the night before in the hiker/biker site and who was also biking to Santa Barbara, showed me where there was a cute market where I was able to replenish my food stockpile. Then, after another side trip to Point Lobos Natural Reserve, where there are miles and miles of oceanside hiking trails and protected Monterey Cypress trees (and where I saw sea otter!!), I was on my way. 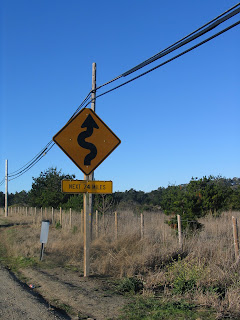 And oh. my. goodness. was it the most amazing biking EVER! The book was right: it was steep(ish) and winding, and there was often no shoulder. However, the unforeseen benefit of bike touring in the winter is that there’s not nearly as much tourist traffic to contend with–but when there was, everyone was considerate and respectful. It probably helped that I often saw the same people over and over: they’d pass me, slowing down and giving me lots of room (sometimes even waving as they went by!), then they’d stop at a viewpoint. I’d pass them as they took pictures and ran around. Then they’d pass me again, give me another smile and wave. Then I’d pass them. It’s harder to be a dick to someone who you know you’ll see again. Perhaps that contributed to the hugely considerate drivers with whom I was sharing the road.

But dude. This road, despite the lack of shoulder and cars and whatever else, was fricken amazing. You know how I said that around Monterey I was so crazy happy to be alive? Today I couldn’t contain it. I found myself exclaiming, talking, singing, yelling, whatever to myself because if I didn’t I felt like I would explode. “Holy SHIT!” I might say. Or “Oh. My. GOD!” Or sometimes I’d just sort of squeal: “eee!” And then I would laugh, because it was so ridiculous that I was biking down the road, looking out over the crazy expanse of ocean, and yelling to no one; it was so ridiculous how happy I was. 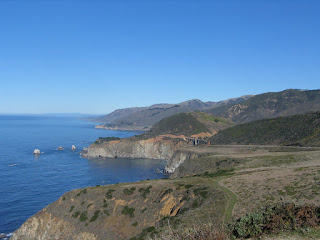 (You can see the road in this picture, if you look–if you start at the bridge it might be easier to find).

So thus it was that the road I was so nervous about turned out to be, basically, the best thing ever.

I only biked a little over 30 miles this day because I wanted time to go hiking in Big Sur, which I’d heard was fantastic. And it was: full of towering redwoods, basically devoid of other people while I hiked. It also felt really nice to devote a few hours to hiking–you know, switch up the muscle groups used;) 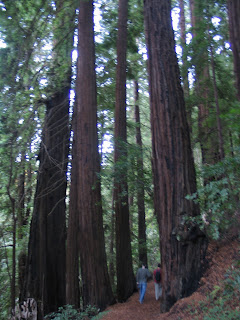 To wrap up the awesomeness of the day, it turned out that the Big Sur hiker/biker site got pretty full that evening. There was John, the guy I’d met the night before at Vet’s Memorial and who made it to Big Sur a few hours after I did, plus an older dude, Brian, who hiked in as part of a trail maintenance team, another hiker, a biking couple who came in pretty late, and a UC Santa Barbara senior called Syke who was biking north to San Francisco during his winter break. In a stroke of genius, Brian pilfered some firewood from the abandoned campground host site and built a fire, which meant that once it got dark at 5, we still had an excuse to stay up, hang out and chat. It was basically everything I’d hope for when taking a bike trip: impromptu friends, solidarity in our enjoyment of nature, and even connections for the future: Skye offered to let me camp out in his house near Santa Barbara if I wanted to when I got there.

When I finally crawled into my sleeping bag at–gasp!–nearly 10pm, I was so…full. So happy. So amazed at what happens when you just set out, trusting that you’ll find good in the people around you.

Dreaded road is, in fact, spectacular.