I woke up to a surprising treat: perhaps because of the intense redwood cover, my tent was almost entirely dry! It probably takes a few days of contending with a heavily waterlogged tent to fully appreciate that fact; at day five, I was pretty psyched about it.

The combination of being up much later than I was used to and the fact that everything was dry (and thus conducive to me, say, sitting at a picnic table without getting soaked), led to a rather lazy morning. Despite the fact that I was still up by 6, it took me a really long time to leave the campground. I packed up my tent super leisure-style, read a little from the book of short stories I’d brought with me, wrote down the crazy dream I’d had in my journal, had a lovely breakfast and chat with Skye, who was also apparently having a lazy morning. It was a lovely change from my normal up-and-at-’em approach to setting out.

And even once I started biking, I took it super easy. The good thing about creating your own bike tour is you can do stuff like that: don’t feel like biking hard? Then don’t. Stop and enjoy the views, write in your journal, look for whales, go for a hike. It’s fantastic. 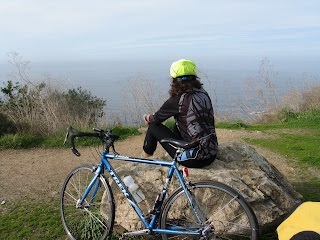 Probably the coolest part of the day was a stop at Julia Pfeiffer Burns State Park, where McWay waterfall spews from the rocky cliffs right onto the sand. It’s just a short hike out to the viewpoint, where you can see this kind of thing (look for the waterfall on the left, just dumping onto the sand. I found that so weird): 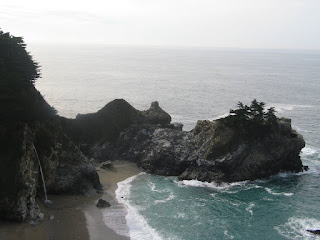 I felt like a total bike ambassador when I stopped here, by the way. I guess I was feeling chatty, but I talked to a whole bunch of people who were curious to hear how I actually traveled around, by myself, with only my bike and trailer. One couple was particularly enamored of how “self-contained” I was: everything I needed to sustain myself was packed into my little Burley trailer and pulled by my own power. Apparently, the two of them used to bike a fair bit, too, but had never thought to actually travel that way. It made me super happy to hear one of them say that he was glad to have met and chatted with me, because it made him think it was possible for them to do a bike tour after all. Awesome!

Whenever I do stuff like this, I often think of myself as an example to others that it is possible–you know, everyone who drives by and wonders where I’m going, or anyone I talk to who thinks how novel an idea it is to travel without a car–all of them are the next potential bike tourists. I think the more that people can see cyclists out there, traveling by human power and fricken loving it, the more it will seem like a viable option. So I was happy to feel like a positive bike ambassador for the day:)

This couple let me in on something I hadn’t been expecting, though: apparently, California was expecting a humongotron storm, destined to hit that weekend. If it was true, that meant I only had 3 or 4 more nice days of biking ahead of me. Time to rearrange my plans so I could get to Santa Barbara by Friday.

I got to Kirk Creek campground by 2:30, way earlier than I probably would have stopped except that John, who’d biked this route before, told me that it was the best campground within a day’s reach. Feeling lazy anyway, I stopped for the day and spent the afternoon soaking up the sunshine, walking around, and playing in the ocean. Plus, John was right–you can’t argue with this sort of campground: 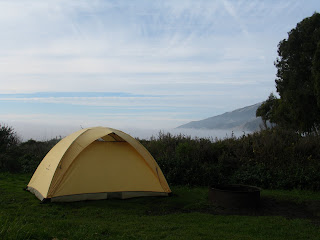 That night, there was also a meteor shower–the Geminids?–that was supposed to peak around midnight. I woke up around then anyway to the sounds of the dubiously sober dude tented next to me verbally abusing a bunch of raccoons who had apparently infiltrated his camp. Mustering up the courage to venture into the cold, I wrapped myself in a bunch of random layers and dove into the dewey night–to great success. In the 15 or so minutes I could stand to be shivering outside (the difference in temperature between day and night was astounding), I saw probably a meteor every minute or two. Gorgeous. And what a lucky thing to be out in the middle of nowhere, nothing but a few clouds to interfere with the stars.