I’d decided the day before that on the second day I’d head back up the way I came, north to Santa Cruz again to hang out in the city a little. With all of its bike lanes, signed bike paths, and hippie vibe, it seemed like a fun place to spend some time.

Happily, on the way out of New Brighton, I ran into the campground hosts who agreed to let me leave my trailer by their camper for the day so I could head back to Santa Cruz unencumbered. I don’t mind pulling my trailer, but if I can bike around without it, I feel much lighter, more nimble, faster. And since I had to go right by the campground again anyway as I continued southward after Santa Cruz, it was the perfect set-up. Thank you, New Brighton hosts!

I was right about Santa Cruz: it was a charming place to spend the morning and afternoon. I found a local bookstore where I surreptitiously charged my cell-phone while reading a book about nutrition; not too far away was a cute health food store where I was able to buy oatmeal for future breakfasts. It wasn’t super warm, but, unlike the day before, it was actually sunny. I enjoyed a picnic lunch while watching the surfers do their thing near the famous Santa Cruz surfer statue. All in all, it was a lovely, low-key day.

The pictoral highlight of my ride: 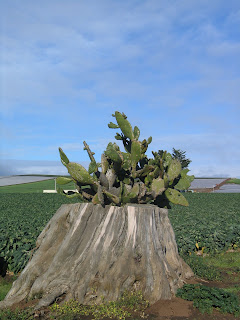 I’m not really sure how that works, but it made me smile. And the crops in the background are all brussels sprouts. It seemed to be prime harvest season, if the trucks hauling tons of them past me all day were any indication. At times, I felt a little like I was following the trail of brussels, as a neat little path of rogue sprouts splattered across the bike lane wended its way in front of my tires.

That evening, I camped only about 10 miles down the coast from my first night’s site at New Brighton, but with the backtracking to Santa Cruz and subsequent wandering around the city, it still ended up being a very mellow 35 mile day. And it felt very classy to be staying at Sunset Beach. Doesn’t “Sunset Beach” sound quintessentially Californian? It was beautiful, too: 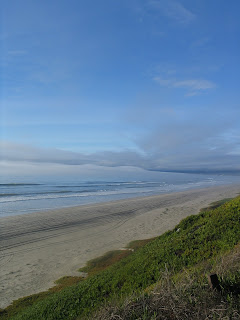 As I set up camp, I came to terms with what would be mildly annoying for the rest of the trip: a tent that never quite dried out. Even on days that weren’t foggy like the first one, the condensation in the air never quite disappeared. I’d sit outside and soon enough be able to see water drops covering the hair on my arms, be able to feel water collecting on my eyelashes. Even in the campground bathrooms, the toilet paper was always a little damp. Nothing ever really seemed to dry out.

So that morning, I’d packed my tent away while it was still soggy from the pernicious fog. Even though the day ultimately ended up being sunny, it took until at least noon for it to become so–much later than I wanted to hang around a campground waiting for my tent to dry, especially when my daylight hours were so precious. So this evening started another nightly ritual for me: I’d take out my tent, set it up, and then flap it around like a crazy person, which, while probably not actually doing much to dry it, at least made me feel a little better.

If fog and residual wetness are all I have to deal with for winter touring, though, sign me up for as many winter tours as I can handle.