The downside of bike touring–at least, if you’re into spectacular mileposts–is that if you’re not on the big highways, you often don’t get a “welcome to…” sort of sign. So even though I finally made it to Santa Barbara today, I didn’t really feel like I’d Arrived with a capital A until hours later, when I sent James a text from the public library saying I’d made it. Only then did I realize, hey, this was kind of an accomplishment after all! Just nine days ago, I was in Half Moon Bay; now I’m halfway down the coast in Santa Barbara!

It was kind of an anticlimactic ending, honestly. I woke up early, even though I was sequestered away in Skye’s house, and as I expected, the world was wet and rainy: super storm had arrived. Mom was driving down to meet me that evening, and with only somewhere between 13 and 15 miles to the city, I had basically a whole day to explore Santa Barbara. Except that with the heinous rain, the normal exploring things I would do seemed less appealing. But on the other hand, it’s not like there was much to do hanging around Skye’s house either, so I set out into the storm.

Once I made it to mission Santa Barbara, like I said, only about 13 or so miles away, I was absolutely soaked. I had to stop for a while and regroup about what I wanted to do, since at that point I was feeling a little less excited about being outside. 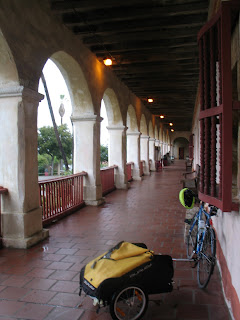 But after a while of sitting there under the mission’s shelter, I realized 1) that even if it was rainy, at least it wasn’t that cold (a plus of being in southern California, I suppose), and 2) whatever dude, it rains in Portland all the time and I bike in it. California was clearly making me soft. So with my spirits renewed, I set out to actually explore Santa Barbara.

I won’t actually write a step-by-step recollection of it or anything, but it’s a lovely little town, with signed bike lanes and everything–even if, like in San Luis Obispo, they’re a little narrow. But it’s always so nice to explore a city with a bike network. That way, even if you don’t have a map or don’t know exactly where you are, you can just follow the bike signs that point you to a certain place. And you know you’ll be able to follow the signs to get back too. I really appreciate that kind of city planning. And in California, it always made me a little nostalgic for Portland and its amazing bike boulevards.

This last day of my trip didn’t honestly feel as much like the rest of it. Especially once I found the hotel that mom and I would stay in and ditched my trailer, biking around Santa Barbara felt pretty comparable to biking around Portland (the rain probably hugely contributed to that perception). Of course, I only had to look around at the palm trees–even as they peeked out through the clouds–to remember that I was, in fact, almost a thousand miles away. 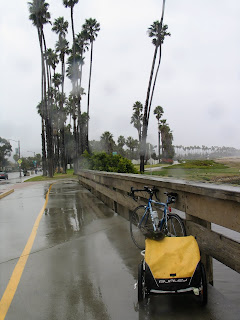 Regardless, it definitely felt like the end of my trip. And trip ends for me are always a little hard. Partly it’s the readjusting to normal life. Even the very fundamentals, like eating, are things I have to renegotiate and reconfigure. When you’re biking all day, you eat a lot. But on this last day, with such light biking, and most of it just around town, I had to remind myself that food was something I should think about and partake of. I just wasn’t hungry. Same with sleeping, choosing what to do with your time, just existing in the world–all need to be renegotiated. Even after only 9 days, my habits are different, my way of being in the world is different. It’s hard to immediately switch back to electric lights, permanent shelter, one central location instead of being in motion all the time… It’s something that I think makes James crazy, because I’m always a little crazy when I get back. And he has to put up with it until I reintegrate.

Anyway. Mom made it down to Santa Barbara and we had a lovely evening walking around, chatting, catching up. It was nice to have a friendly face to celebrate the end of an adventure with. 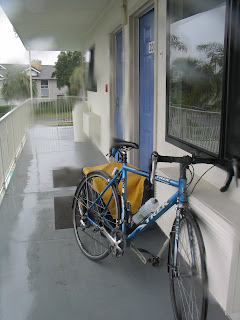 And when we drove back up to Half Moon Bay the next day–in absolutely dumping rain–Alex’s van was still there where I’d left it. Hooray!

And now I’m back in Portland, after James and I had a nice Christmas in Sacramento with our families…and I’m already itching for more bike adventure…