This picture, though not actually from my bike club, is how I’ve been spending a bunch of my time lately: 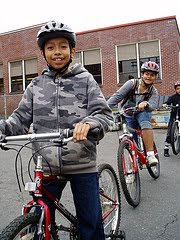 Bike Club is an after school program put on by Portland’s Community Cycling Center, where low-income 9-12 year olds learn about bike safety and maintenance, get some bike riding confidence, and ultimately, upon graduation from the program, get to keep a donated bike, helmet, lock, and set of tools for their own use.

It’s pretty fricken awesome. First of all, it hooks kids up with bikes–kids who generally wouldn’t have access to functional bikes on their own. There’s nothing like the freedom of a bicycle, and, if it’s true that bikes are a form of social justice (which, clearly, they are;), we’re doing a lot for these underserved kiddos. Secondly, it gives kids the skills to take care of their bikes, and a way to lock them so they can use them as viable transportation. It also gets them out exploring their own neighborhood by bicycle, learning to read maps and choose safe routes, learning about what’s in their community, and otherwise seeing that it’s feasible to get places on their own. They get the feeling of having earned something by their own hard work and learning. And, of course, it gets them outside and moving–always a good idea!

On my end, it’s pretty fricken awesome, too. It lets me teach, outside. I get to interact with kids, help them learn the tangible skills that contribute to their own freedom and experience of the world. I get to be a goofball, since that seems to go over really well with 4th and 5th graders (yesterday found me doing a pretty mean impression of a lava monster, grabbing their feet as they gleefully danced about the playground we’d biked to;). And it’s hooked me up with a large cohort of other socially-conscious, kid-loving, bicycling Bike Club teachers.

I come home every day after Bike Club so excited about life. This is, by far, one of the best things I’ve ever volunteered for.